I had no idea that I’d piss off so many dudes when I made this video a year and a half ago. I just thought it was a nice topic that might get a little conversation going. Boy was I wrong. So sit back, relax and let’s take a second look at the most commented video on my channel.

Okay, the video we’re going to revisit today, I uploaded back in November 2019. It doesn’t have the most views on my channel, but it does have the most comments. And, besides all the comments about my hair, my beard, my shirt and the way that I talk, most of the comments say something like; “Who cares what women want”. I guess they missed the title and the thumbnail. 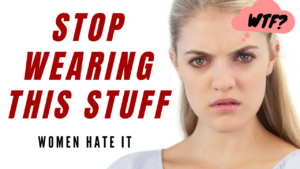 At any rate, I’d like to think I’ve gotten a lot better in front of the camera because in that video, I look a little stiff. But the statement that I made at the beginning of the video about ruffling feathers, turned out to be 100% accurate. So, if you haven’t seen the entire video, I’ll link it right here. And as I’m filming this, it has just under a million views with almost 5,000 comments. So let’s see if we can get it up to an even million views. Alright, click the video above and let’s go through it together.

FOUND THESE PICTURES ON MY COMPUTER FROM LAST FALL