Today I thought it might be fun to mess around a little bit with celebrity photos on Google Images. Now this is something we can all do from home. I found a celebrity that I like (Daniel Craig), so I’m gonna try to emulate some of his style using pieces that I already own. Ready to follow along? Alright gentlemen, one of the best ways to get wardrobe inspiration is to use Google images or Pinterest. You can just look up celebrities that you like and check out the paparazzi photos, or you can get specific by asking Google specific things. For example, you can type in; “Men’s tan blazer”, or “Men’s navy sweater”. Also, if you’re trying to figure out how different items might look together, you can type in something like; “Jeans with brown shoes” and look at some of the results.

Anyway, let’s get things started with a few pictures I found of Daniel Craig. Firstly, Daniel is 52 years old, and he’s 5’ 10”, I couldn’t find his weight, but I’m guessing because he’s pretty fit, about 185 or so. From what it seems, Daniel wears a lot of denim and he likes to cuff them. He also wears boots a lot. So for this first image, he’s wearing a black bomber jacket, a white dress shirt, dark denim with some mild distressing and blue suede chukka boots. It does look like he’s wearing a black woven belt, which I’m okay with, but since I have a blue belt, I’m gonna go with that instead because it matches my blue boots better. This is a nice casual look for the daytime, but as you can imagine, it also looks pretty cool for evening activities (once we’re allowed to go outside again). 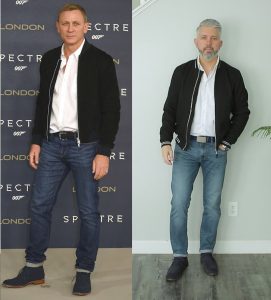 The next image I have he’s wearing a navy crew neck sweater over a white dress shirt with a tie, dark gray chino’s, again cuffed, with what appear to be black suede chukka boots. Okay, this one is pretty simple and classic. But what he does by adding boots and cuffing his chinos adds a little rakish touch to his style. Now, My chino’s aren’t long enough to cuff and I don’t have black suede chukka boots, but I do have these dark olive boots that are a pretty good substitute in my opinion. I can’t tell what watch he’s got, but I’m sure it’s a lot nicer than mine. 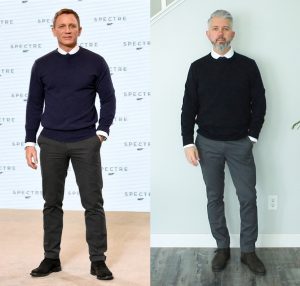 Okay, in the next image he’s got what appears to be a light gray or light blue shirt with a gray tie underneath a navy v-neck sweater this time. Once again he’s going with cuffed blue denim with chocolate brown boots. The jacket looks like a very nice black, peak lapel overcoat, and he’s carrying a black case. Okay, since I don’t own a black overcoat, I went with this blue one instead. I also don’t own boots like that, so I went with these chocolate brown Chelsea boots instead. If I had my black messenger bag with me right now, I’d show it to you, but you can improvise with whatever you’d like, or nothing at all. 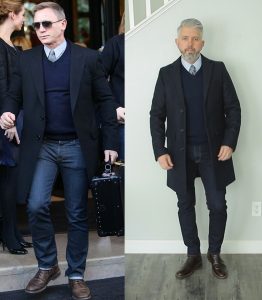 That’s kind of the point here guys. You don’t have to have the exact items to make this work. Just substitute in the items that you do have that are close. Also, if you have some ideas for who I should look at next, let me know in the comments. Real quick though, if you’re not yet subscribed to my YouTube channel, please consider doing that now because I’m here twice a week with new videos. And the entire reason this site exists is to prove that it’s never too late and you’re never too old to make a change or start something new. I’ll see you in a few days for a brand new video, but until then, live well, stay healthy and I’ll see you soon.