Today I’d like to talk about conversations and how to better hold someone’s interest when you’re having a conversation. So to begin with, the largest demographic on this site are men between 35-64. A lot of these guys are married or in relationships, but a lot of you guys are single. I meet and talk to a lot of guys that are recently divorced and are finding themselves back out there looking for a new relationship. Now, I’m not a dating or relationship expert, but I do have some experience in this specific arena. And also, you don’t have to be single to benefit from this video. Having better conversations can help with lots of different areas of your life.

By asking better questions and genuinely engaging in conversation, the person you’re talking to automatically feels that you’re invested in them and they’ll want to keep the conversation going. Look, this concept isn’t rocket science, but it’s also a lot easier said than done. So the next question is, how do I keep the conversation going? There’s a lot of things you can do, but start by being informed and asking better questions.

If you want to have a conversation with someone, start one. If you’re afraid that they won’t talk to you, they weren’t talking to you a second ago so it’s a not a valid fear in my opinion. Ask obvious questions that start small talk. I even mentioned this in another video, but compliment people on something. Practice on random people at the grocery store. Practice on your server at restaurants and try using better words. Instead of asking; “what do you like to do in your free time”, ask “what’s your passion” or “what are you passionate about”? People want to talk about their passion. Maybe they have a visible tattoo? Ask about it. “Wow, I’m digging your tattoo. What’s the story behind it?” As they tell the story, look for things you have in common so you can expand on them and further the conversation. 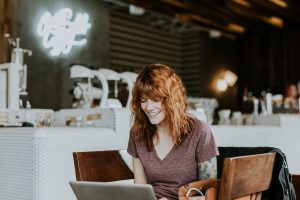 So, this is something that I’m working on personally. I’m not super into politics, but I do have my opinions. I also don’t watch a lot of network TV right now and I get most of my current event updates online. I’ve also been discovering new courses on Skillshare for the last few months since I heard about them from watching some YouTube videos. The cool thing is, when they reached out to sponsor a video, I instantly knew what I wanted to talk about because having more things to talk about, automatically makes you appear more interesting and it’s a lot easier to keep conversations going.

Skillshare is sponsoring this article and if you’re not familiar, this is an online learning community with thousands of inspiring courses. You can explore courses in marketing, productivity, crafts, photo and video along with tons more about entrepreneurship and even graphic design.. there’s a lot to explore. I’ve been into some social media courses and even some cooking and interior design courses lately because to be honest, cooking is a weak point for me. Look, an annual subscription is less than $10 a month, but if you click this link, you can get 2 months of Premium Membership for free and start 2020 off by learning something new today that you didn’t know yesterday.

Here’s something Bill Nye said once; “Everyone you will ever meet knows something you don’t.” You have to be open and willing to learn from the other person. If you think you know everything about everything, you’re not gonna be very fun to talk to. But when you really engage and you’re willing to learn something new from someone, your conversation gets a lot more genuine and meaningful and you make a greater impact on the other person. 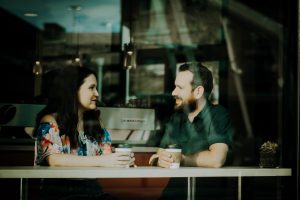 Don’t multi-task. Like it or not, there’s no such thing as multi-tasking. You’re just switching focus from one thing to another rapidly. So the truth is, when you’re in one task, you’re really not in the other one. We’ve all had those conversations where it’s very clear the other person isn’t paying attention. They might say they’re listening while checking their phone or something, but it doesn’t feel very good on the receiving end of this behavior. If you want to work on making better conversations, be present and listen. And, when you listen to somebody, listen to listen, don’t listen to reply, there’s a difference. Sometimes, the best questions are the easiest, and that’s to simply ask why.

Ask an opinion about something basic.

Don’t get too complicated because otherwise it can start to sound like an interrogation, and you don’t want that. Also, if you don’t know something, say you don’t know. There’s nothing wrong with that. If you don’t know whatever it is, but you fake it like you do, you start fumbling around and it becomes pretty obvious that you don’t know and the credibility you’re trying to build just went away.

Before I get into the last few, if you’re digging this kind of men’s lifestyle content for grownups, please consider subscribing over on my YouTube channel because the whole premise around this channel is to prove that it’s never too late to change something that you want to change, no matter what it is.

It’s important that you make eye contact, because if the other person is talking and you’re looking all around the room at something else, it becomes apparent that you’d rather be somewhere else talking to someone else, so if you’re into the conversation, be into it completely. Also, don’t assume you know what it feels like for the other person. If they’re telling you about something tragic, don’t automatically jump in with; “Oh, that happened to me too”. Instead, ask things like; “How does it feel to be reminded of that?” “What was that like for you?” These are deeper questions that make the other person search to describe their feelings. They could be happy feelings or sad feelings, but either way, if you’re asking better questions that cause the other person to tell you things they wouldn’t normally talk about, you just became a lot more memorable and you made a connection. You have to be genuine though, don’t fake this. Thanks for being here and I’ll see you in a few days for a brand new video, but until then, live well and I’ll see you soon.

This error message is only visible to WordPress admins