Today I want to chat for a few minutes about jackets and general outerwear for men. I’ve been somewhat reluctant to tackle this subject because, I mean let’s be honest, I live in Southern California and I really don’t have a strong need for a lot of heavy winter coats and jackets. However, with that said, A lot of you guys that live in other parts of the country and other parts of the world are interested in this topic. So I have a list of jackets and outerwear that I do own and that I think just about every guy could benefit from owning, so let’s jump into it.

So first up, a disclaimer. If you live in a really cold climate like Alaska or Montana, you already know what you need. Your needs are basically all about the function, and not so much the form. On the flip-side, if you live in a warm climate like southern California or south Florida, some of these jackets may be too much for you. The outerwear and jackets that I’ll be talking about in this video are more for your general or average climates.

This post is in partnership with Peter Manning and SOME of the jackets I’ll be showing you in the video were supplied by them, but more on them a little bit later. So, pretty much all of the jackets I’ll be talking about are completely age appropriate for us older guys as well as for some of the younger guys also. I would not hesitate to wear any of these jackets even if you’re at or past the half-century mark like I am.

The bomber jacket, not to be confused with the flight jacket, is extremely versatile and comes in all types of different materials and colors. You can get bomber jackets in very light fabric, and even leather and suede. I picked up a pretty inexpensive black one from Zara maybe two years ago and it gets a fair amount of use. Although I wouldn’t mind picking one up in some type of dark olive color or even brown suede. Like I mentioned, bomber jackets are extremely versatile and it’s one of those jackets you really don’t have to think about. If you’re running out really quick to the grocery store, you just throw it on. You have to run a quick errand, just throw it on. Going out for a casual dinner, just throw it on. Also, if you have a few different colors, it’s real easy to just grab the one that works best that day and head out the door. 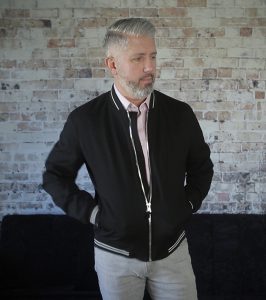 This is a jacket that I believe every guy above the age of 40 needs to have in his wardrobe. If you just have one, that’s great. If you have more than one, even better. The sports jacket is such an important staple and versatile piece of outerwear they can take you so many different places. It’s elevated enough to garner respect for your age and what you’ve accomplished in life, and it’s casual enough to pull off at your local tap room. It’s super easy to dress up or dress down, you can wear it with jeans or Chino’s, and pretty much go anywhere you like. 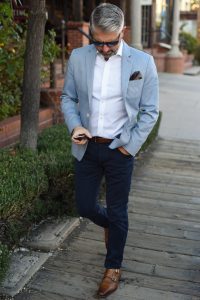 You can tell the Harrington jacket by the unique collar, and also the plaid or tartan pattern on the inner lining. Just like the bomber jacket, it’s your casual, go anywhere jacket while being just a little more on the preppy side. This one is from Peter Manning, who like I mentioned supplied me with a couple of the jackets for this video. I’ve talked about Peter Manning before because I really like what they’re doing. As a guy myself who’s 5 foot 9, I sometimes have a hard time finding clothes that fit my body proportions, especially my torso length and my arm length. 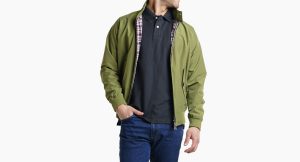 Peter Manning does a great job with their classic take on modern menswear for guys under 5 foot 9. They make jeans, chinos, and dress pants all the way down to a 26 inch inseam. They also make shirts, sweaters and outerwear that have all of the correct proportions. I’m a average height the guy at 5 – 9, but just about every single off the rack shirt or jacket has sleeves that are way too long for me and I always have to cuff jacket sleeves. It’s not just a matter of taking a normal shirt or jacket and chopping it off, Peter Manning did a ground up redesign because all of the proportions on shorter guys are different. Look, jump on this link and use this code; 40OVERFASHION and get 20% off your order for a limited time, and if you’re a shorter guy, I highly encourage you to go check out everything they have.

This one’s good for your colder weather and is another staple that just about every guy should have at the ready when the temperatures start to drop. It’s pretty tough to dress up a puffer jacket, but this one looks pretty darn good on its own and it’s right at home with a pair of jeans and boots. One thing I might suggest about puffer jackets and some of this outerwear I’m showing, is to size down a little bit. If you’re normally a large, go try on some stuff in medium. A lot of times what you’ll find is the fit is much better and makes you look a lot more tailored and cinched in at the waist as opposed to wearing something oversize that’s big and baggy. Jackets are bulky enough on their own, so just be aware of the fit when you’re out looking and make sure you’re not swimming in it. 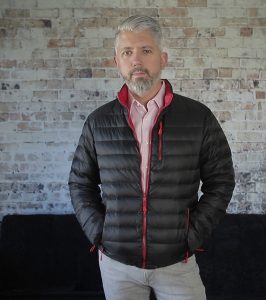 The fit, feel and construction is fantastic and even though there are some people on YouTube say that men over 40 shouldn’t wear leather jackets, I disagree. I believe a great quality refined leather jacket like this one is absolutely appropriate for a man over 40. I would however suggest staying away from a lot of zippers and some of the younger trendy leather jackets that are marketed towards the 20 something. Jackets like this one are classic and will always stand the test of time so it’s absolutely worth investing in one because it will be as relevant today as it will be 10 years from now. 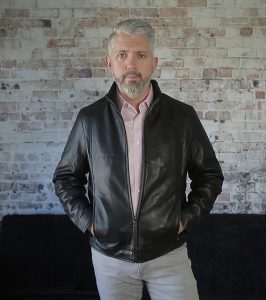 This is a jacket that’s been around for many years while mostly remaining unchanged. I’ve made a video about denim jackets before, and I currently own two of them. I have one in lighter blue, and this one in black. I’ve seen guys wear these with dress trousers, a dress shirt and a neck tie, but I tend to wear them more casually. If I want to dress it up though, it’s super easy to throw on a nice pair of chinos, some dress shoes or even a nice pair of boots would look great. Once again gentlemen be aware of the fit, and try to size down. Trucker jackets like this are usually cut fairly boxy, so sizing down can give you a much better silhouette. 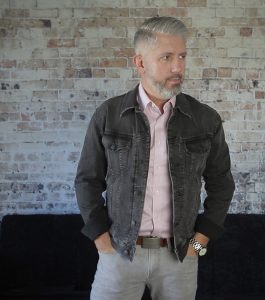 Again, this one being from Peter Manning fits me great and you guys have probably seen this in another video, but I absolutely love this coat. I’ve already worn this out on several different occasions, and it was absolutely the perfect choice. I’ve owned Pea coats in the past, and I’d still like to find myself another one, but this is the first long overcoat that I’ve ever owned and I’m absolutely loving this thing. A coat like this is great for cold weather because of how thick it is, but it’s also great for more dressy events or wearing over your suit or sport jacket to the office. Until next time gentlemen, live well and I’ll see you soon. 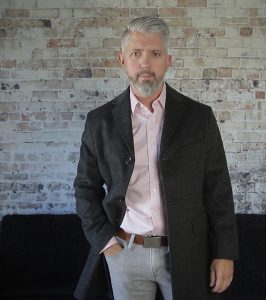