I’ve done a bit of traveling over the last few months and I’m getting a lot better at streamlining the items I pack. So today, I want to show you what I pack for a business trip without checking a bag, and my thought process that goes into it. About two weeks ago I went to a conference in Atlanta and I was going to be there for 3 and a half days, so essentially, I needed three changes of clothes that could easily take me from day to night.

The day I arrived, that evening I was going to a big dinner hosted by the founders of the conference. The dinner was incredible, but the point is, I needed to wear something on the plane that was comfortable, but that could also be appropriate for the dinner. I didn’t go too crazy, but I wore a nice pair of denim, a white dress shirt underneath a navy sweater. For shoes, I wore dark brown Chelsea boots. These boots are not only super stylish, but also slipped on and off easily going through security. I also brought one other pair of loafers in my carry on that I could’ve worn, but since the boots would’ve taken up more space in my carry on, I wore them.

Wear bulky items on the plane.

This Segway’s into the first packing tip I have for you. If you’re bringing bulky items like boots or a heavy jacket, wear them on the plane if you can to save room in your carry on. The carry on you choose is also a critical decision that can make or break your trip. I went to San Francisco in January and attempted to carry everything on in a really nice leather duffle bag and a computer bag. On the flight there, the duffle bag was fine as a carry on, but on the flight back, I was told the duffle was too big and unfortunately, it had to be checked. Well… this is no longer a problem with my new favorite carry on that I’ve been using and testing out from Carl Friedrik.

Cark Friedrik has been gracious enough to sponsor this article and also provide a discount if you use this special link and use the special code: 40overfashion. Like I said, this is one of my absolute favorite pieces of carry on luggage I’ve ever used. And like I said, I have been using it. It has an incredibly durable Polycarbonate shell with a rigid aluminum frame and two TSA approved locks. You can choose from a few different colors of beautiful vegetable tanned leather that’ll age very nicely over time. 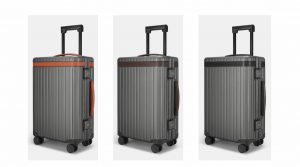 My favorite part of this bag might just be the wheels. 360-degree swivel movement and the smoothest glide I’ve ever experienced. Even rough concrete was no problem. It was kinda cool cruising through the airport pushing it way ahead of me because I needed two hands to get into my computer bag on my shoulder. It just went and even sort of steered itself straight ahead. You can also bring your own power brick and charge on the go with the built in cable and USB port. Like I mentioned, use the special link and discount code below to get a great deal on a great carry on that I’m happy to help promote.

Roll your clothes to save space.

Okay, the next tip I have for you for trying to get a lot of items in a carry on like this is to roll your clothes. This does two things, Number one, It helps prevent crease marks from flat-folding, and number two, it saves a lot of space. My thought process for this specific trip was to bring three separate outfit changes, with some overlap in versatility.

So day one was the travel day with a dinner when I got there, and we already pretty much covered what I wore. But, what I didn’t mention was that the jeans I was wearing could also be worn on the trip home to save space. Also, the sweater I wore could potentially be worn on the trip home as well. Day two was the first day of the conference and I kept things nice, but also pretty simple with gray denim, a patterned dress shirt and a nice zip sweater with the same dark brown Chelsea boots. I had another dinner invite that evening, so this was easily able to take me into the evening dinner. And if the sweater didn’t get to musty, I could wear it on the return flight as another option.

Day 3 was the second day of the conference and I was speaking at 10:00am. I wore a really nice pair of custom Daniel George trousers, a dress shirt with a knit blazer and a pair of blue loafers. I thought this would look polished and professional on stage and also be comfortable enough to get me through the day and into the evening. Day 4 was the travel day back home. I ended up wearing the same pair of denim I wore on the flight down, a fresh t-shirt underneath the zip sweater from Day 2 and once again, the Chelsea boots.

Guys, if you’re not already a subscriber to my YouTube channel, please consider doing that now because I’m here twice a week and the entire reason this channel exists is to prove that it’s never too late and you’re never too old to try something new. Also, don’t forget to hit the link in the description and use the special code to get yourself a great deal on this carry on from Carl Friedrik. Gentlemen, thanks for watching and I’ll see you in a few days for a brand new video. But until then, live well and I’ll see you soon.

I HOPE THE WEATHER IS GETTING WARMER IN YOUR PART