What’s going on guys? Today I want to give the dress boot some love and talk about why they’re a great option for the colder months and also why they seem to be under-utilized. The fact is, you can wear a dress boot in the same situation that you’d wear a dress shoe. Stick around because today I’m showing you several different ways you can style a dress boot, and how you can win by wearing ‘em.

I’ve wanted to make this post for quite a while and the time is finally here to make it happen. Because, in my opinion, dress boots, and boots in general, are a staple in the Fall, Winter and Spring. The only time my boots take a little rest, is during the summer time. So, with boot season occupying that much time on the calendar, there’s no reason not to have a few pair of boots in your footwear arsenal. And a pair of dress boots can a great addition to round out your rotation.

When can you wear a dress boot?

Let’s talk for a minute about when you can wear dress boots and when it’s appropriate. The good news is, it’s very simple. Any time that you would wear a dress shoe, you can wear a dress boot. It’s basically that simple. The cool thing is, because it’s a boot, you have even more versatility to wear a dress boot with more casual clothing like chinos and dark denim. Now, notice I said dark denim. Lighter wash denim or jeans with more distressing are just too casual in my opinion to wear with a dress boot or even dress shoe. So, if you’re gonna dress up a pair of jeans with a nicer pair of shoes or boots, stick with the dark wash.

Let me give you a visual comparison as an example of wearing a dress boot in the same situation that you’d wear a dress shoe. These are dress boots next to dress shoes. Albeit slightly more casual dress shoes because of the broguing and wingtip details, but you get the idea. Any time you’d normally wear a dress shoe like this, you can wear a similar boot. And the boots I’m showing you throughout this video are from today’s sponsor, Thursday Boot Company. 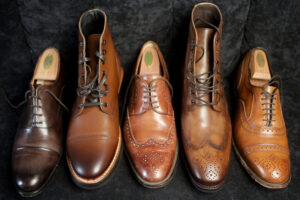 If you watch my channel, you already know I’m a fan of Thursday Boots. I was a fan even before I started working with them. Whether it’s lace-ups, rugged boots, chelsea boots, chukkas, you name it… They’re all made with 100%, tier-1, USA bovine leather, and they handcraft all their boots with Goodyear Welt Construction. Which of course is the gold-standard of shoe-making. Goodyear Welt construction is a more costly way to make boots with an extra layer of leather and stitching. BUT It makes the boots more comfortable, water-resistant — and most importantly – they’ll last for years and years because you can easily re-sole them.

I’m seriously loving these new wing tips. They have the look and feel of a super nice wingtip dress shoe. The leather is nice and soft, and the rubber sole is absolutely perfect for the fall and winter when it’s wet outside… Because you won’t be slipping around like you would with a leather sole. Trust me. I walked around San Francisco last winter in a pair of leather sole dress shoes and almost did the splits outside my hotel, and then again a few minutes later because the street was wet. It was scary. Rubber soles have way more traction so it’s not an issue.

Thursday Boots are designed for guys that understand quality, but don’t want to pay high retail mark-ups for great looking boots that are built to last. They’re comfortable, versatile, durable and of course, they look amazing. If you’re looking for a high-quality dress boot, or any other style of boot at the lowest direct-to-consumer price out there, Thursday Boots has you covered.

Personally, I feel like a lot of guys ignore the dress boot and don’t consider it as an option in their cold weather wardrobe. But I think that’s a mistake. Everybody’s wearing dress shoes right, but not everyone’s wearing dress boots. And that’s where you can win because it’s a little unexpected. When I see a dude wearing a suit or business casual and he’s wearing a pair of dress boots, in my mind, I know he gets it. It’s like; ‘Yeah, I could’ve worn shoes, but I wore boots instead because I can, and because it’s a little different’. And, because boots have a thicker sole and a taller heel, you stand a little bit taller which is a nice bonus… especially if you could use a few inches of extra height. And because it’s a boot, there’s a more masculine aesthetic and feel as opposed to a regular shoe.

As you can see in the video I posted above, the wingtip is perfect with a gray suit or with a pair of chinos and a light jacket. And, as I mentioned earlier, dark denim is another terrific option. Throw on a sweater or a jacket, and you’re ready for business. These Captain model boots with the cap-toe design are super versatile. I even have this same boot in a dark olive suede that I wear a ton. Suede isn’t going to be as dressy, so I wouldn’t wear it with a suit. But jeans or chino’s, absolutely.. any day of the week.

« How To Make A Lasting Impression – Positive Impression
Answering Your Assumptions About Me | Q&A Time! »

I LOVE PALM SPRINGS IN THE WINTER! ❤️🌴 Hav

BABY IT’S COLD OUTSIDE! ❄️ I JUST POSTED A V

I HAVE A LOT TO BE GRATEFUL FOR! SOMETIMES WE FORG

WHETHER YOU’RE SPENDING THE HOLIDAY BY YOURSELF

THIS PHOTO WAS TAKEN DURING A PROMO PROJECT FOR @m